Never has there been more of a need for Governments in Holyrood and Westminster to take decisive action to ensure that everyone has access to good food.  Ahead of the STUC and TUC upcoming Cost of Living Summit and Demonstration on the 17th and 18th of June, we are urging them to include the Right to Good Food in their demands on Government as a matter of urgency.

The Larder has been delivering good food with dignity for over 5 years and in that time have supported over 1500 individuals in West Lothian, who have been hungry, to eat good food, in social settings, with dignity and choice. We delivered 140,000 ready meals to over 900 people during Covid.  We continue to deliver 900 meals every week to 300 individuals who are moving from despair to destitution as the Cost of Living Crisis starts to take a real grip on those on the lowest incomes. We see and hear first-hand the harrowing stories of parents going without food to feed their children and only this weekend heard about someone who was burning their furniture to heat their home and make ends meet; such destitution in one of the world’s wealthiest countries!

The number of people experiencing food insecurity is such that this must now be declared a ‘national food emergency’ and the STUC and TUC must make ‘The Right to good food’ a key demand from their national activity on the 17th and 18th of June.

Because, make no mistake about it, this is a major crisis in working class communities. The extent of the crisis is evidenced in a series of recent reports. The Food Foundation reported that the number experiencing food insecurity has jumped by 57%. 7.3 million, adults are living in households where people have gone without food or could not physically access it. This means people are going without meals, giving food to other members of their family or are reliant on charitable donations to eat. There are many consequences of this but the mental health impact and feeling of shame and guilt for those impacted is tragic and profound.

In another report the National Institute for Economic and Social Research (NIESR) identified another 250,000 households that ‘will slide into destitution taking the total number in extreme poverty to around 1.2million’ as the incomes of the poor fail to keep up with soaring inflation, the appalling Universal Credit cut from Rishi Sunak and endemic low pay.

This confirms what we already see at the Larder:  The number of people struggling to survive is soaring and will get worse unless there is immediate action to stop it.  So what do we need to do?

At the Larder, we recognise that food banks have played a necessary role in helping feed hungry people but we have to move away from a charitable model of the deserving and undeserving poor that provides poor food for poor people, to a system based on dignity, equality of access, social solidarity and mutual support. As with all steps to truly eradicate any kind of poverty, we need Governments to take real action.  One step that both governments could be taking now is to begin to enshrine the right to food in law and fund grassroots community organisations to deliver sustainable food with dignity in their area.

In the Scottish Parliament, the Good Food Nation Bill is going through the parliamentary process. This Bill is well-meaning but does not go far enough.  It was devastating to see that SNP, Green and Tory MSPs voted down an amendment, presented by civic organisations, to enshrine this right in the bill.  We would call upon them to reconsider and take urgent action to ensure that no one goes without food.

We will not stop campaigning for this change and we have another chance with Rhoda Grant MSPs member’s bill to enshrine this right in law.

Whatever happens, the Larder will continue to do our best to feed people with good food but we need help, we need Governments at Holyrood and Westminster to work meaningfully and proactively with partners to deliver good food with dignity.

So let’s see ‘The Right to Good Food’ become one of the key demands on June 17th and 18th, call on the UK and devolved Governments to declare a national food emergency and call for a crisis food summit to plan a national response to the hunger and food insecurity that shames these islands. 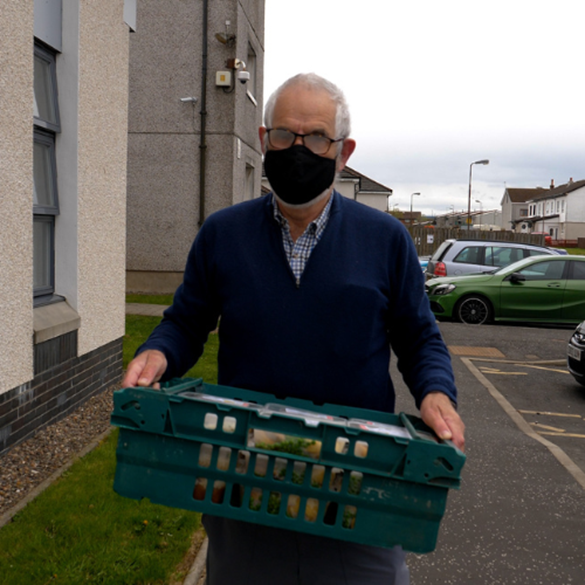